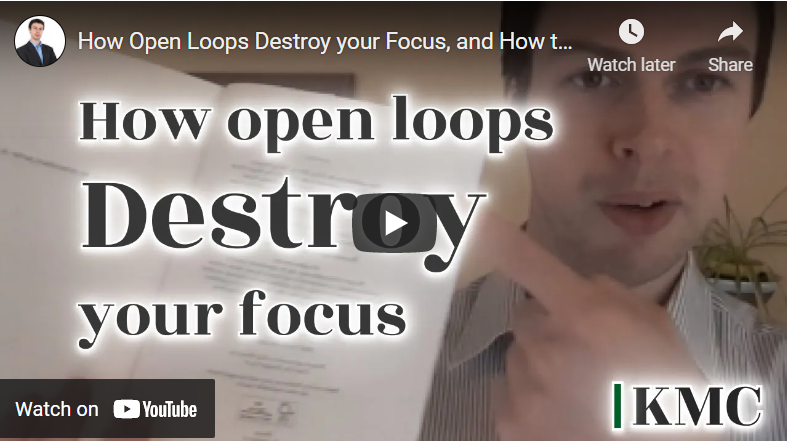 How Open Loops Destroy your ability to Focus, and what to do about it.

So I’m trying something new today. I’ve been a blog writer on and off for the last number of years, but I’ve never done a video blog or “Vlog”, if you will. So welcome to this… This is what that is [actually this is the transcription of that vlog, but let’s not be pedantic].

What I wanted to talk about today is open loops and how they destroy your ability to focus.

So what are open loops?

They’re ongoing processes that don’t have a resolution that are taking up space in our mind. So if you use the analogy of a computer, it’s like multiple browser tabs being open that are each consuming some of the computer’s working memory. You might also have a few apps running in the background, maybe even some larger programs like video editors that are still open, not being used, but they’re just holding something that needs to be finished that you haven’t saved and closed down on the computer. That’s all using the computer’s RAM and it’s reducing the computer’s ability to do work.

A very similar process happens in our own minds when we’re trying to hang on to too many thoughts at the same time as focusing on the one thing we really want to be doing right now. So for example, these might be; you have to remember to add honey to your shopping list and you’ve to remember to call back Dave later. You don’t have these things written down anywhere and in the meantime, you’re trying to just spend a half an hour to get this one job finished that you’re trying to focus on all that [distraction]’s still going on.

And there might be several, several other things as well to add to that. So open loops can really reduce our ability to focus on what we’re trying to get done and really just make any job take a lot longer.

This is also called the Zeigarnik Effect after the psychologist Bluma Zeigarnik who studied it.

So we want to be able to close these open loops and get back some of our focus.

So what would we do to diminish that?

The key thing here is to have systems that you can trust where your brain knows that those open tasks, even though they’re not finished yet, they’re ‘handled’. They’re okay to forget about. That’s the point you want to get to.

So for example, if I’m focusing on preparing the notes for making this video and something else comes to mind, like I have to remember to buy something downtown later, I have a little space on my daily tracker for notes and another one for distractions. The thoughts that come up and derail me from what I’m trying to focus on, those will get written down there.

And I know that once I’m finished this task, or once the timer goes off for the Pomodoro technique I’m doing, then I’m going to take those notes and put them on my actual to-do list, and I know that from there they’re going to get handled. I can trust that system. I’ve been using it long enough that once I write it down, it’s just out of my mind and I can focus back on what I was doing.

Now, if you’re not in the middle of a Pomodoro sprint or some other timed work and you’re in your daily life, you have a bit of flexibility, you’re cooking dinner or whatever, there’s something called the “Two Minute Rule”.

It’s that if a task that just came to mind takes less than two minutes to complete (maybe it’s putting away the mail, filing something into your filing cabinet or sending a quick text or remind somebody about something); if you can finish that task and close that loop in two minutes or less – you should just do it immediately. There’s no need to write it down. There’s no need to add it to a planner. Just get it done. Get it out of the way and close that loop as soon as possible.

Credit where credit’s due; David Allen talked about that in his book, Getting Things Done, (the two minute rule). So full credit to him for that idea. It’s become widespread thanks to the popularity of the “GTD” (getting things done) method over the last 20 years.

And the third way that we can handle open loops, or at least some of us can, is to Delegate it. Depending on what the task that comes to mind is, again, it might be better to write just that quick note if you’re in the middle of the timed sprint, but then after that sprint, you want to delegate it to someone who can have responsibility for getting that task done. And it might only take two minutes to delegate if you have employees, or if you have a virtual assistant that you trust, or maybe your kids if it’s a household task, you want to just ask them to get it done.

It comes back to the first thing I said, which is that you have to have systems that you trust to get it done. Otherwise the loop is still open.

So if your employees, or your virtual assistants are completely reliable, then fantastic! You can trust that that job’s going to get done. I then used the example of delegating it to your kids. Now, if your kids are fully trustworthy to finish whatever task you’ve given them, clean their room or whatever, great, you can trust that that open loop is now closed.

Otherwise you might need a new system. If you’re going to have to follow up on that later. It’s not a closed loop. But maybe you have a system for that where every evening at 9:30 PM (if these are teenage kids), you check in with them that their chores are done. You just have to ask them to do it once. Then you come back later and ask “is it done or is it not?”. Maybe there’s accountability for that. Maybe there isn’t. Just a quick, random example of a way you could handle that…

So that’s it! Just a few thoughts on what open loops are and how they derail us from our focused work and some thoughts on how to close them. I hope that’s useful for you guys, all the best.

Talk to you soon.

Please leave a comment and let me know what you thought of this new format.